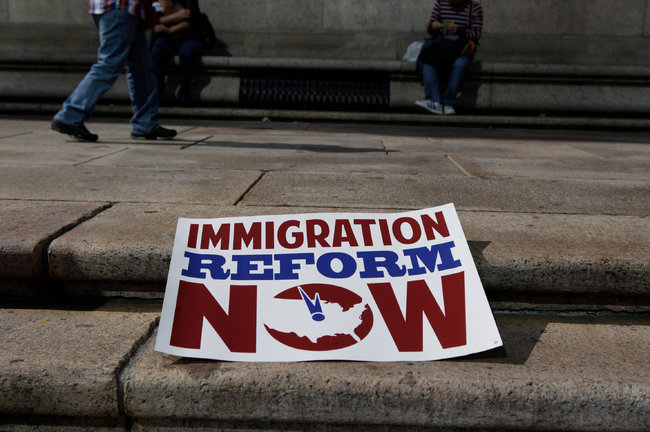 Lest you mistakenly thought that Amnesty had faded away, no it hasn’t. Marxists and illegal aliens across the US are still pushing it — hard. With the help of Progressives on both sides of the aisle, from Nancy Pelosi on the Left to Paul Ryan on the Right:

Thousands of supporters of an immigration overhaul held rallies on Saturday at more than 150 sites in 40 states, trying to pressure Congress, despite the partisan turmoil in Washington, to focus on passing a pathway to citizenship for millions of immigrants here illegally.

Hoping to display the wide reach of their movement, advocates held larger rallies in immigrant strongholds like Los Angeles, San Diego and Boston, with smaller demonstrations in places where immigrant groups have grown recently, including Atlanta; Rogers, Ark.; and Yakima, Wash. Organizers described the events, and a large rally they have planned for Tuesday on the National Mall in Washington, as their major show of force this year.

On what they called a “National Day of Immigrant Dignity and Respect,” supporters said more than 50,000 people had turned out nationwide. But the demonstrations came when few lawmakers on Capitol Hill were thinking about immigration, with the federal government shut down and the House of Representatives locked in a feud with President Obama and Democrats over health care and debt funding.

Even while advocates have built up their strength — with a broad coalition of business, labor, religious and law enforcement groups calling for a comprehensive bill — they fear that momentum is slipping away for Congress to act this year.

In New York, advocates rallied, in an upbeat mood, in Cadman Plaza in Brooklyn and then marched over the Brooklyn Bridge. Bill de Blasio, a Democrat who is the front-runner in the mayoral race, spoke as his wife, Chirlane McCray, stood beside him.

He said New York had a “special obligation” to push Congress for a path to citizenship for immigrants without legal status. “We have to set the example here of how to include all of our brothers and sisters even if they’re not documented,” Mr. de Blasio said.

Watch both sides of the aisle. While we are embroiled with the thugs and their fascist attack on our WWII Vets at the National Mall, busy little Marxists are giving all they’ve got to move Amnesty forward:

On Wednesday, Democrats in the House of Representatives, at the urging of the minority leader, Representative Nancy Pelosi of California, introduced a bill that closely matched broad bipartisan legislation passed by the Senate in June, including a path to citizenship for most of an estimated 11.7 million immigrants in the country illegally.

The House bill had no Republican sponsors, so its prospects were uncertain at best. But it gave advocates something to rally around, after a bipartisan House group’s efforts to write legislation fell apart last month.

Several House Republican leaders, including Representative Robert W. Goodlatte of Virginia, the chairman of the Judiciary Committee, have said they hoped to hold votes on smaller immigration bills during the fall.

Mr. Goodlatte’s committee has approved bills that would sharply tighten immigration enforcement and provide more visas for highly skilled workers, but no bill so far that offers a legal pathway to immigrants here illegally.

You better, you better, you bet… Don’t cross that line Progressives. We’re still watching and fighting and we won’t let you keep Amnesty alive and well and moving forward; entrenching a permanent Marxist majority rule in the US.