Everything’s always about him. It matters little to the guy who’s supposed to be President of the USA that Obamacare is underwater in every single poll taken going all the way back to before this “train wreck” of a bill was passed via bribery and parliamentary tricks. Nope, he cares more about himself, and he forgets to note that he and his family will never have to live under the conditions his signature law created/creates. 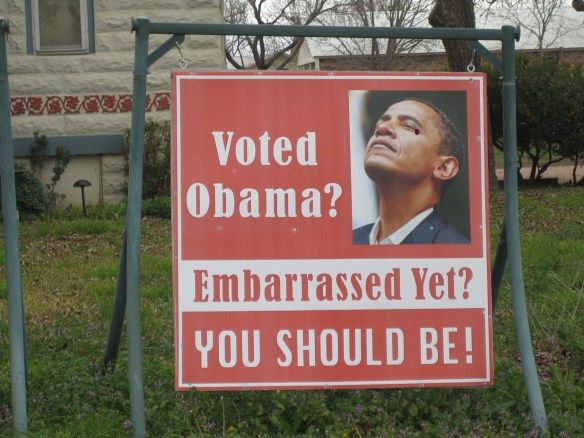 (CBS News) He called on Congress to quickly pass a funding bill that would avert a government shutdown beginning the start of the new fiscal year October 1st, and to also enact an increase in the debt ceiling, so the U.S. Treasury can resume borrowing to pay its obligations.

“They’re willing to plunge America into default, if we can’t defund Obamacare,” said the president.

“This is not a banana republic,” the president said of the possibility the U.S. might have to default. “We don’t run out on our tab. We just can’t not pay our bills.”

How do you pay a $16 trillion tab? One of the definitions of “banana republic” discusses being run by a dictator and being dependent on foreign capital to survive. The US government borrows 43 cents on every dollar it spends. Obama acts like dictator-lite. We have, depending on the source, $75-180 trillion in unfunded liabilities. But, hey, Obama’s not concerned with all that. Don’t mess with big bad tough Obama.

Meanwhile, he called House Speaker John Boehner up for a brief whiny call to rule out any negotiations. Tough guy O will negotiate with Putin, Assad, Iran, the Taliban, but not the GOP.