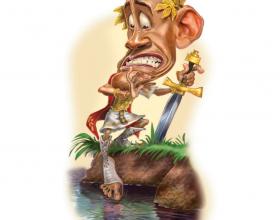 Oh, the sheer genius! P.J. O’Rourke has outdone himself and that takes some doing. In I Came, I Saw, I Skedaddled, O’Rourke parodies the many feckless faces of Barack Obama. Among the pearls of clarity:

Chief Executive of Sparta, Barack Leonidas Obama, at the Battle of Thermopylae

Stand down, men. The chairman of the Greek City States Alliance Joint Chiefs of Staff has indicated to me that our capacity to execute this mission against Xerxes is not time-sensitive.

I am crossing the Rubicon. Brrr, the water’s chilly. Deep, too. I’m going for a walk along the riverbank to look for a bridge. And I will cross the Rubicon as soon as the weather warms up. The die has been cast. That is, the deck has been shuffled. Or the Wheel of Fortune has been spun. And I’ll buy a vowel.

That he which hath no stomach to this fight,

Let him depart. So I’m out of here.

Let every nation know, whether it wishes us well or ill—and since we’re not engaged in nation-building, every nation should wish us well—that we shall pay any price if it’s not too high, bear any burden unless it’s burdensome, meet any hardship unless it’s hard, support any friend if we have any, oppose any foe—although no nation should think of us as a foe because we’re not that kind of country anymore—to assure the survival and success of liberty, unless it’s a holiday weekend.

That’s one small step for .  .  . Nope. I think I’ll go back up the ladder to the lunar module. Maybe Buzz Aldrin would like to go first.

I have a daydream.

And the hilarity ensues. Truth in humor and I am still weeping. Yes, our not-so-fearless leader is a figure of historic proportions – or not. Read. It. All.