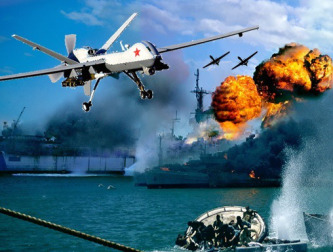 China has been quietly and aggressively going after drone technology. Between drones and space warfare, such as the ability to kill satellites, China is preparing heavily for confrontation with the US. They join a new axis of evil with Russia and Iran and the atomic clock is ticking.

BEIJING — For almost two years, hackers based in Shanghai went after one foreign defense contractor after another, at least 20 in all. Their target, according to an American cybersecurity company that monitored the attacks, was the technology behind the United States’ clear lead in military drones.

“I believe this is the largest campaign we’ve seen that has been focused on drone technology,” said Darien Kindlund, manager of threat intelligence at the company, FireEye, based in California. “It seems to align pretty well with the focus of the Chinese government to build up their own drone technology capabilities.”

The hacking operation, conducted by a group called “Comment Crew,” was one of the most recent signs of the ambitions of China’s drone development program. The government and military are striving to put China at the forefront of drone manufacturing, for their own use and for export, and have made an all-out push to gather domestic and international technology to support the program.

Foreign Ministry officials have said China does not sanction hacking, and is itself a victim, but another American cybersecurity company has tracked members of Comment Crew to a building of the People’s Liberation Army outside Shanghai.

China is now dispatching its own drones into potential combat arenas. Every major arms manufacturer in China has a research center devoted to drones, according to Chinese and foreign military analysts. Those companies have shown off dozens of models to potential foreign buyers at international air shows.

China has already deployed a drone in disputed waters off of Japan. They are now considering using them against criminals as the US is doing. They have stealth combat drones, as well, already up and running. So, while Obama continues to gut and weaken US armed forces, China, Russia and Iran are massively beefing up. China is not shy about hacking in and stealing our technology — using cyberespionage at every opportunity. But, as the Clinton Administration gave them our technology, I suspect this one is, too.

Estimates say the US now has a fleet of about 7,000 drones and China’s is second to that. I don’t believe that. I believe that both Russia and China now have superior numbers to ours by substantial amounts. Certainly, it is where they spend the bulk of national funds — about 124 billion. While the Obamas are vacationing, our enemies are girding their loins for WW III. The US would have lousy odds in Vegas right about now.