Columnist Bill McClellan has been spewing his liberal worldview in the St. Louis Post-Dispatch for decades now. Today McClellan espoused ending military funeral honors.
“Most veterans did nothing heroic.”

From McClellan’s column in the St. Louis Post-Disgrace:

According to the program’s website, it is funded by the federal government and the Missouri National Guard Trust Fund.

Both the federal government and the state government are broke. So why are we providing military funeral honors for all veterans? It is a nice gesture we can’t afford.

Certainly, men and women killed in combat deserve full military honors. It’s a way for the country to say, “We honor the memory of those who died in our service.” These military honors — and the thought behind them — are intended to provide some solace for the families of the fallen.

But what about the guy who spends a couple of years in the military and then gets on with his life? Bear in mind that most veterans did nothing heroic. They served, and that’s laudable, but it hardly seems necessary to provide them all with military honors after they have died. In fact, it seems generous enough to provide veterans and their spouses with free space and headstones at a national cemetery.

Why not let the veterans organizations provide military honors at the funerals of their members? If a person gets out of the Marine Corps and wants to stay connected, he can join the Marine Corps League. I’m sure the 101st Airborne has an association. In a more general vein, we have the American Legion and the VFW.

Providing military honor funerals for their members would be a boon to these organizations. Membership would presumably climb, and veterans who want the military funerals could still get them.

This is exactly how you do it.

An early postcard from Jefferson Barracks. 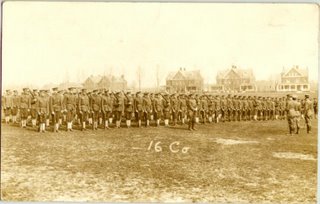