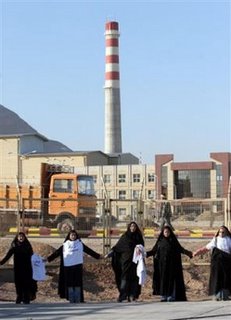 Iranian women form a human chain at the Isfahan Uranium Conversion Facility in support of Iran’s nuclear program, just outside the city of Isfahan, 410 kilometers, 255 miles south of the capital Tehran, Iran, Sunday, Jan. 22, 2006. Iran said Israel would be making a ‘fatal mistake’ should it resort to military action against Tehran’s nuclear program and dismissed veiled threats from the Jewish state as a ‘childish game.’ (AP Photo/Vahid Salemi)

Barack Obama will reportedly tell Israeli Prime Minister Benjamin Netanyahu that the US is gearing up for an Iranian strike.
The Times of Israel reported:

When he visits Israel next month, US President Barack Obama will tell Prime Minister Benjamin Netanyahu that a “window of opportunity” for a military strike on Iran will open in June, according to an Israeli TV report Monday evening.

Obama will come bearing the message that if diplomatic efforts and sanctions don’t bear fruit, Israel should “sit tight” and let Washington take the stage, even if that means remaining on the sidelines during a US military operation, Channel 10 reported. Netanyahu will be asked to refrain from any military action and keep a low profile, avoiding even the mention of a strike, the report said, citing unnamed officials.

In London Monday, Secretary of State John Kerry said an Iran with nuclear weapons was “simply unacceptable” and warned the time limit for a diplomatic solution was running out.

“As we have repeatedly made clear, the window for a diplomatic solution simply cannot remain open forever,” said Kerry, on his first international tour as America’s top diplomat. “But it is open today. It is open now and there is still time, but there is only time if Iran makes the decision to come to the table and to negotiate in good faith.

“We are prepared to negotiate in good faith, in mutual respect, in an effort to avoid whatever terrible consequences could follow failure, and so the choice really is in the hands of the Iranians. And we hope they will make the right choice,” Kerry added.