As we wait for the VP announcement—
Here’s a Condi flashback from October 2005 when the former Secretary of State chased down the ex-Soviet dictator Nursultan Nazarbayev.

After Secretary of State Condoleezza Rice made stops in Kyrgyzstan, Afghanistan, Pakistan, and later to Tajikistan, she was not about to put up with any silliness from the Ex-Soviet Autocratic President of Kazakhstan, Nursultan Nazarbayev, on Thursday.

After their opening remarks, the Kazakh Leader left his podium. That is when Condi chased him down and brought him back to the podium to answer reporter’s questions! 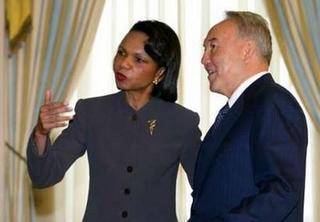 And, from Andrea Koppel’s question you can see why!
(from US State Department)

QUESTION: Andrea Koppel with CNN. I have a question for both of you. Mr. President, one of your daughters controls the media. The other controls the main bank here. The opposition, the political opposition, is routinely harassed, arrested. What evidence is there that you are anything more than a dictator?

Ouch! (She may want to tone it down some or she may end up like Andrea Mitchell from NBC.)

PRESIDENT NAZARBAYEV: (Via interpreter.) What I said about the freedom of speech, I said I underlined that it should not be a freedom of misinformation. So I think that our opposition has provided you with some…(blah, blah,…)

SECRETARY RICE: Andrea, I think if we were interested only in oil and the war on terrorism we would not be speaking in the way that we are about democracy here or in Saudi Arabia or throughout the Middle East.

And so quite clearly, while we do have interests in terms of resources and in terms of the struggle for terrorism, we have in no way allowed those interests to get in the way of our open and clear defense of freedom.

We have talked about that in any number of circumstances. I think that, for instance, in Uzbekistan it’s been very clear that we do not see a conflict between our strategic interests and in our interests in democracy. In fact, we’ve spoken up clearly in that case. I’m here talking, on camera, with the President about the need for Kazakhstan to have free and fair elections; to have international observation of those elections; to have access to media for the opposition. I met, after the speech, with two people who will be a part of the campaign. And I will take their concerns with me to Washington and we will press for free and fair elections here, just as we pressed for free and fair elections everywhere else in the world.

And so our position is consistent around the world. The need for democratic change and the need for opposition to be able to express themselves freely and we expect the same of Kazakhstan.

It was just another day of work for Condoleezza Rice.

Related… Here is the speech that landed Condi on Mitt’s short list.