Ilan Halimi thought he was going out on a date.
Ilan was lured to his death by a woman he had met while at work in his telephone store. The two met up late on the night of January 20, 2006, in one of Paris’s southern suburbs, Bagneux. She was what is called a “honey pot.” She lured Ilan from his home and into the hands of a group of local radical Islamists called “The Barbarians.” They targeted him because he was a Jew. The Barbarians had connections with Hamas. They kept him naked and tied up for weeks. They tortured him and invited their friends and family over to torture him. They cut him and burned him with cigarettes and in the end stabbed him in the neck, poured flammable liquid on him, set him on fire, and pushed him from a train. 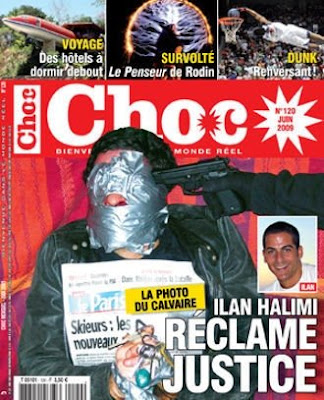 In December 2010 a French court upheld the convictions of 16 people for their roles in the kidnapping, torture and murder of Ilan Halimi.

Now one of Halimi’s killers is posting anti-Semitic videos from prison claiming he is a “war trophy” of New York Zionists.
The Local reported, via ROP:

Youssouf Fofana, the leader of a gang known as the Barbarians is suspected of posting anti-Semitic videos online. Fofana was jailed in 2009 for torturing and killing a Jewish man in the Paris suburbs.

“I am Fofana, Youssouf, a young Muslim who has flaws and who has made mistakes,” says the man on the videos posted on YouTube. The man insists he is a “war trophy” taken by New York zionists, le daily L’Est-Eclair reveals.

“It’s unacceptable to see something like that today,” said Emmanuel Gauthrin, an official working for the prison section of the trade union FO, in an interview with Le Monde.

French prosecutors in the town of Troyes have opened a inquiry into how the videos were posted on the web. Le Monde reports that Fofana’s cell was searched and that no recording equipment was found inside.

Fofana, the leader of a gang called the Barbarians, was handed a life sentence in 2009 for the murder of a Jewish man Ilan Halimi.