Members of the Notre Dame faculty sent President Obama a letter declaring the HHS mandate is “a grave violation of religious freedom and cannot stand.”

Too bad they didn’t see this coming when they decided to invite and honor the most radical pro-abortion and pro-infanticide president in US history to speak at Commencement ceremonies in 2009. 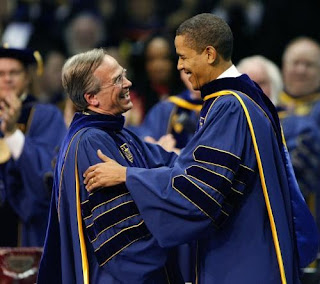 Twenty-five Notre Dame faculty members–led by the university’s top ethics expert, and including some of the school’s most eminent scholars–have signed a statement declaring that President Barack Obama’s latest version of his administration’s mandate that all health insurance plans in the United States must cover sterilizations and all FDA-approved contraceptives, including those that cause abortions, is “a grave violation of religious freedom and cannot stand.”

The statement—put out on the letterhead of the University of Notre Dame Law School–is also signed by leading scholars from other major American colleges and universities, including Princeton, Harvard, Stanford, Georgetown, Brigham Young, Yeshiva and Wheaton College.

Prof. Carter Snead, a professor of law at Notre Dame, was one of the lead organizers of the statement, which was published on his official law school letterhead. Notre Dame’s top ethics expert, Snead serves as director of the university’s Center for Ethics and Culture, a position to which he was appointed by Father John Jenkins, the president of Notre Dame.