What a courageous woman!
Venezuela opposition leader Maria Corina Machado confronted Marxist Hugo Chavez during his annual speech to the Venezuelan National Assembly. The brave woman called Chavez a “thief” and told him the country did not want communism.
The Real Cuba reported:

Hugo Chávez spoke for more than 8 hours during his annual speech to the Venezuelan National Assembly on Friday, during which he announced the closing of the Venezuelan consulate office in Miami.

The US government expelled the Venezuelan consul in charge of that office after accusing her of conspiring with Iranian and Cuban agents to attack the US computer networks.

María Corina Machado, a Venezuelan legislator and a potential presidential candidate, told Chávez that during his marathon state of the country speech, he didn’t say a word about the things that the Venezuelan people really wants to hear, the shortages of basic goods like milk, untamed crime and failed nationalizations that she referred to as “robberies.”

“We’ve been listening to you for eight hours describe a country very different to the one we mothers know,” she said, telling Chavez: “Mr. President, your time is finished.”

“The Venezuelan people do not want communism.”

Machado has been fighting the Marxists in Venezuela for years. 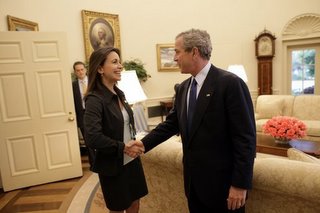 President George W. Bush welcomes Maria Corina Machado, the founder and executive director of Sumate, an independent democratic civil society group in Venezuela, to the Oval Office Tuesday, May 31, 2005. Sumate was established in January 2002 as a non-governmental organization to defend the electoral and constitutional rights of all Venezuelan citizens and to monitor and report on the performance of Venezuela’s electoral institutions. (White House photo by Eric Draper)