What a shock. Another violent bomb-planting leftist… 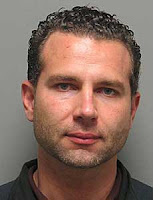 Top local democrat Milton Ohlsen III was indicted today for planting a bomb in a parking garage that injured a local attorney.

The democrat hid his identity behind balloons after planting the bomb.
FOX 2 reported:

A former Democratic political operative has been indicted by federal authorities for allegedly planting a bomb in a CLayton parking garage in 2008. The bomb went off, seriously injuring a Clayton attorney. Police believe he was not the bomber’s intended target.

Milton Ohlsen iii nicknamed “Skip” is well known to law enforcement. He’s also well known in Democratic political circles. The feds now say he’s the one who planted a bomb in a garage at 190 Carondolet plaza in Clayton on October 15, 2008.

Federal prosecutors say ohlsen made the bomb and put it in the parking garage where it went off and injured clayton attorney John Gillis.

Starting in 2004 Ohlsen was used as a consultant by the Missouri Democratic party. He even had lunch at the governor’s mansion with then-governor Bob Holden.

The bombing victim John L. Gillis said he was doing “reasonably well” after receiving a series of skin grafts to treat burns caused by the bombing.