A new congressional Joint Economic Committee report confirms that the Obama administration’s monetary policies have added approximately 56.5 cents to the price of every gallon of gas you pump. 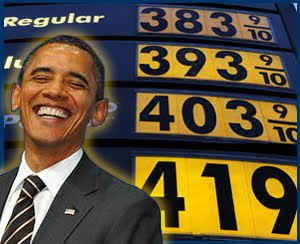 The Obama administration’s monetary policies have added approximately 56.5 cents to the price of every gallon of gas you pump, according to a new congressional Joint Economic Committee report.

Estimates suggest that had the dollar maintained the value it had when Obama came into office, gasoline would cost approximately $3.40 per gallon instead of around $4 per gallon in many parts of the country.

“Analysts and pundits often cite, correctly or incorrectly, the turmoil in the Middle East, a strengthening global economy, or speculation as the causes for the run up in crude oil prices,” the report said. “What is rarely discussed as an important factor in the rise of the dollar price of oil is the role played by the dollar itself.”

The report attributes this increase to the Federal Reserve’s policy of increasing the money supply through the purchasing trillions worth of bank notes, treasury notes and mortgage-backed securities, known as quantitative easing, which it says has fueled inflation.

President Obama publicly defended the Fed’s decision to engage in quantitative easing last fall during the G20 Summit in India in the wake of Fed Chairman Ben Bernanke’s decision to print money to buy back $600 billion worth of government bonds in August 2010.

“It was designed to grow the economy,” the president told Bloomberg.