Imam Feisal Abdul Rauf’s longtime partner Faiz Khan, a physician who claims to have been a first responder after the September 11 attacks, is a 9-11 Truther.

But that’s not all…
Faiz Khan signed the 9-11 Truth.org petition. This is the same crackpot petition that brought down former communist Green Czar Van Jones. They both believe the Bush Administration was behind 9-11 and signed the official 9-11 Truth Document demanding a further investigation. 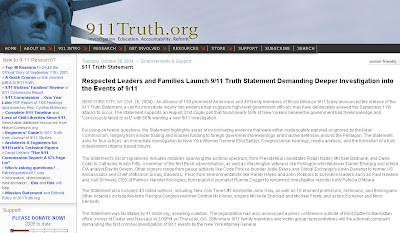 NEW YORK CITY, NY (Oct. 26, 2004) – An alliance of 100 prominent Americans and 40 family members of those killed on 9/11 today announced the release of the 911 Truth Statement, a call for immediate inquiry into evidence that suggests high-level government officials may have deliberately allowed the September 11th attacks to occur. The Statement supports an August 31st Zogby poll that found nearly 50% of New Yorkers believe the government had foreknowledge and “consciously failed to act,” with 66% wanting a new 9/11 investigation.

Focusing on twelve questions, the Statement highlights areas of incriminating evidence that were either inadequately explored or ignored by the Kean Commission, ranging from insider trading and hijacker funding to foreign government forewarnings and inactive defenses around the Pentagon. The Statement asks for four actions: an immediate investigation by New York Attorney General Eliot Spitzer, Congressional hearings, media analysis, and the formation of a truly independent citizens-based inquiry.

And now Faiz Khan is working to build a victory mosque at Ground Zero.
This is outrageous.