We Will Not Be Silenced

Last year the Pelosi-Obama regime passed the most irresponsible and damaging piece of legislation in American history – the Trillion Dollar Stimulus Bill. They dumped a trillion dollars into a government sink hole with the promise that they would create jobs. We knew better. We were afraid for our families and our country. We were outraged and took to the streets. We spoke out. We came out. We protested the elites. 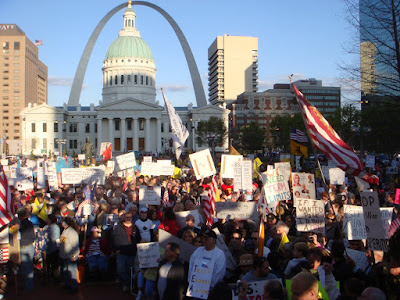 On April 15th of last year we met in cities across this great nation. We protested the reckless spending, the record deficit, the bailouts, the careless decisions being made by this radical Administration and Congress. We came out in force, hundreds of thousands of us. We stood as one.

We shocked the elites. We shocked the radicals and extremists. They couldn’t believe that we were speaking out. This wasn’t their plan. They knew they had to react and they lashed out at us. They called us mobsters, Nazis, radicals, and racists. They beat us, and smashed us in the face and bit off fingers. They wanted us to pipe down; to be good little drones as they continued to wreak havoc across this great nation with their radical agenda. But, we gathered on street corners and met them at town halls.

They rammed through radical piece after radical piece of legislation. They took over whole industries. Their thirst for power was never quenched. They ignored the nation’s unemployment and instead focused on the next industry they could takeover and control. We organized and marched on Washington. Hundreds of thousands of us. They lied about our numbers.

In January they rammed through their nationalized health care plan. They lied to us. They said it would save us money. It won’t. They said it would not cover abortion. It did. They said your insurance plan won’t change. It will. We met them in Washington. And their state-run media lied about us and made up stories that we were racists. Despite proof they continue this lie today. But…

Today they reach a new low. The far left NAACP will pass a resolution calling us racists. We are hurt. We are angry. We are upset with this horrible lie.

We will not be silenced.
Not now. Not ever.

The St. Louis Tea Party Coalition passed a resolution last night condemning the racist attacks by the NAACP and the democratic-media complex.

Whereas, the National Association for the Advancement of Colored People (NAACP) was founded to advance the position of minority groups, and

Whereas a hallmark of the NAACP has been to do the important work of identifying and exposing remaining vestiges of racism and discrimination, and

Whereas the NAACP vocally stands against the discriminatory and harmful practice of labeling people with a broad brush, and

Whereas the NAACP decided to launch their 101st National Convention with a resolution condemning the Tea Party movement and labeling millions of their fellow Americans who subscribe to the movement as “racists”, and

Whereas the “Tea Party movement” is a label applied to patriotic Americans who have expressed their political free speech in the grand tradition of all that is American, that being the spirited expression of viewpoints in a 100% peaceful manner, and

Whereas, it is a hallmark of America that we settle our disputes civilly and avoid the gutter tactic of attempting to silence opponents by inflammatory name-calling, and
Whereas the very term “racist” has diminished meaning due to its overuse by political partisans including members of the NAACP, and

Whereas, the NAACP had an opportunity to preserve some semblance of legitimacy by standing up for Ken Gladney, the victim of a vicious racist battery conducted by a black avowed communist, even labeling him an “Uncle Tom”, but chose instead to use the opportunity to mock the St. Louis Tea Party, and

Whereas, the NAACP has refused to denounce the New Black Panther’s call to murder white cops and their babies, and

Whereas, the NAACP does its entire membership a grave disservice by hypocritically engaging in the very conduct it purports to oppose,

Now therefore be it resolved that the St. Louis Tea Party condemns the NAACP for lowering itself to the dishonorable position of a partisan political attack dog organization, and,

Be it further resolved that the St. Louis Tea Party calls on similar organizations to join in unanimous condemnation of this despicable behavior, and

Be it further resolved that we demand that the NAACP withdrawal their bigoted, false and inflammatory resolution against the tea party for any further consideration, and

Be it further resolved that these organizations call on the Internal Revenue Service to evenly apply their standards and consider the tax-exempt status of the NAACP considering the degree to which they are engaging in habitual partisan political behavior.

A copy of this resolution shall be sent immediately to the NAACP at: [email protected]

More… Kate added this below:

As I read the well written resolution, I could swear I had a “tingle up my leg.”
Excellent. The dewussification of America has commenced and this resolution lays the foundation. I commend the St. Louis Tea Party for making a stand against the NAACP racist hypocrites. Their cries of racism are void and without merit and they will no longer be effective to silence those with legitimate concerns for our great country.