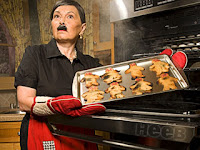 Roseanne Barr wrote this week on her blog that Republicans cherish the freedom to have sex with small children.
What a horrible person.
NewsBusters reported, via FOX Nation:

“[K. P. Bath] cherishes the freedom to have sex with small children, as all [R]epublicans do,” Barr continued. She then added, in parentheses, “just kidding, sort of.”

Barr, who pals around with Michael Moore and Code Pinkers, has become known for scribbling bone-headed political commentary on her personal blog.