It could be argued that President George W. Bush was the greatest environmental president in the last 100 years. During the Bush years air pollution levels in every category fell from 2001 to 2007.

But, that’s not all…
One of the most significant environmental tragedies of the late 20th Century was the destruction of the Mesopotamian Marshes by Saddam Hussein. The Iraqi marshes were the largest wetland ecosystem of Western Eurasia. The genocidal dictator drained thousands of miles of southern Iraqi marshland after the 1991 War and slaughtered the Marsh Arabs who lived there. But after Iraq was liberated from their brutal tyrant the US restored the region. George W. Bush resurrected the marshes. In early 2003, less than 10% of the Mesopotamian Marshlands remained. By early 2004, 40% of the marshlands had been re-flooded. Since the liberation of Iraq the marshes have been restored to over 85% of their former glory. 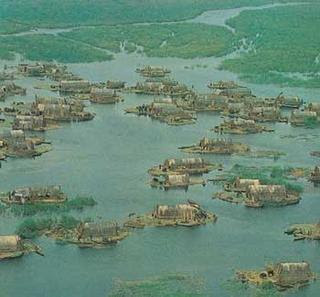 A photogragh in 1977 of the marshlands before Saddam drained the land of water. (Nik Wheeler)
George W. Bush brought life back to the Iraqi marshes.

Contrast this resurrection story to what we are witnessing today.
40 plus days ago, a BP rig exploded in the Gulf of Mexico killing 11 workers. Since that time the underwater well has been spewing over 798,000 gallons of oil into the waters off the Gulf coast each day. And, where has Barack Obama been during this time? On vacation, playing golf and basketball, partying with rock stars and threatening BP. Instead of initiating a proactive approach to the disaster, Team Obama has ignored, downplayed, and passed the buck on the worst environmental disaster in American history. If you taught Leadership 101 this would be a great example of Exactly NOT what to do.

Crude oil has already been reported along barrier islands in Alabama and Mississippi, and has impacted about 125 miles of Louisiana coastline. Today the oil slick is expected to reach the pristine white sand beaches of Pensacola Beach, Florida. How sad.

Bush restored the Iraqi marshes. Obama destroyed the US marshes.