In 2008 the Archbishop of Canterbury said that Islamic (Sharia) courts in Britain seemed “inevitable” and could aid “social cohesion” even though women have no rights under such a system. 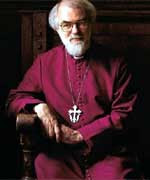 In 2009 Archbishop Rowan Williams thanked Muslims for bringing religion back to Great Britain.

Today it was reported that Archbishop Rowan Williams told reporters that the Catholic Church had lost all credibility in Ireland.
Breitbart.com reported:

The Roman Catholic Church in Ireland has lost all credibility because of its mishandling of abuse by priests, the leader of the Anglican church said in remarks released Saturday. A leading Catholic archbishop said he was “stunned” by the comments.

The remarks released Saturday marked the first time Archbishop of Canterbury Rowan Williams has spoken publicly on the crisis engulfing the Catholic Church. The comments come ahead of a planned visit to England and Scotland by Pope Benedict XVI later this year.

“I was speaking to an Irish friend recently who was saying that it’s quite difficult in some parts of Ireland to go down the street wearing a clerical collar now,” Williams told the BBC. “And an institution so deeply bound into the life of a society, suddenly becoming, suddenly losing all credibility—that’s not just a problem for the church, it is a problem for everybody in Ireland, I think.”

The interview with Williams, recorded March 26, is to be aired Monday on the BBC’s “Start the Week” program as part of a general discussion of religion to mark Easter. But its publication ahead of the interview caught Catholic leaders off guard.