More Hope and Change…
Obama’s latest assault on your rights– He wants to ban sport fishing. 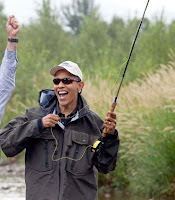 The American Sportfishing Association reported back in October about the sweeping changes proposed by the Obama Administration in regards to the sport fishing industry:

A sweeping oceans and Great Lakes management policy document proposed by the Obama Administration will have a significant impact on the sportfishing industry, America’s saltwater anglers and the nation’s coastal communities. The draft policy, the Interim Report of the Interagency Ocean Policy Task Force, issued on September 17, will govern federal Pacific and Atlantic Ocean waters and Great Lakes resource conservation and management and will coordinate these efforts among federal, state and local agencies. This past June, President Obama created the Interagency Ocean Policy Task Force, led by the Chair of the Council on Environmental Quality (CEQ), to develop a draft national policy and implementation strategy for conserving and managing the United States ocean territory and the Great Lakes.

Now it looks like the Obama Administration is going to move ahead with these restrictions.
ESPN reported:

The Obama administration will accept no more public input for a federal strategy that could prohibit U.S. citizens from fishing the nation’s oceans, coastal areas, Great Lakes, and even inland waters…

“When the World Wildlife Fund (WWF) and International Fund for Animal Welfare (IFAW) completed their successful campaign to convince the Ontario government to end one of the best scientifically managed big game hunts in North America (spring bear), the results of their agenda had severe economic impacts on small family businesses and the tourism economy of communities across northern and central Ontario,” said Phil Morlock, director of environmental affairs for Shimano.

“Now we see NOAA (National Oceanic and Atmospheric Administration) and the administration planning the future of recreational fishing access in America based on a similar agenda of these same groups and other Big Green anti-use organizations, through an Executive Order by the President. The current U.S. direction with fishing is a direct parallel to what happened in Canada with hunting: The negative economic impacts on hard working American families and small businesses are being ignored.

“In spite of what we hear daily in the press about the President’s concern for jobs and the economy and contrary to what he stated in the June order creating this process, we have seen no evidence from NOAA or the task force that recreational fishing and related jobs are receiving any priority.”

Consequently, unless anglers speak up and convince their Congressional representatives to stop this bureaucratic freight train, it appears that the task force will issue a final report for “marine spatial planning” by late March, with President Barack Obama then issuing an Executive Order to implement its recommendations — whatever they may be.

Led by NOAA’s Jane Lubchenco, the task force has shown no overt dislike of recreational angling, but its indifference to the economic, social and biological value of the sport has been deafening.

Additionally, Lubchenco and others in the administration have close ties to environmental groups who would like nothing better than to ban recreational angling. And evidence suggests that these organizations have been the engine behind the task force since before Obama issued a memo creating it last June.