Rush on a Ram-page–
Hero Rush Limbaugh threatened legal action today against those state-run media reporters who slandered him with bogus racist quotes:

Via Brietbart TV
The liberals are upset that Limbaugh, a conservative, is wanting to purchace the St. Louis Rams NFL football team. So mainstream media reporters are flooding the airwaves and newspapers with bogus stories about Rush’s so-called racist quotes. 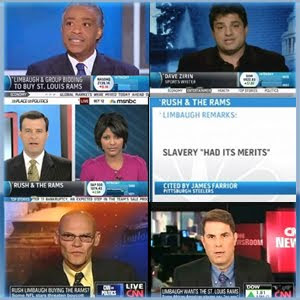 Several state-run media outlets have slandered Rush with a fabricated quote about “slavery having its merits.”

UPDATE: Earlier today Smash Mouth Politics put a timeline on the “slavery has its merit” smear. Evidently, an anonymous commenter named “Cobra” spread this racist lie about Rush on the internet starting in 2005.

When I did a Nexis search for Limbaugh and James Earl Ray, I couldn’t find a single use of this so-called quotation until this March. Consider the source: Jarvis Tyner, executive vice chair of the Communist Party USA.

Somewhere tonight there is one very nervous communist.