It looks like he wasn’t the one they’d been waiting for. His personal story could not win over the judges.

Chicago will not host the 2016 Olympic Games.
Chi-Town was eliminated in the first round of voting.

Drudge headlines- “The Ego Has Landed” 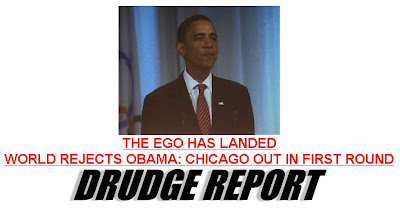 It’s a good thing he’s a democrat or the state-run media would have a field day with him.

But, President Obama did meet with his top Afghanistan Commander while in Denmark for 25 minutes aboard Air Force One.

Poor Barack. That flight back to DC won’t be much fun. Maybe he’ll focus on the record unemployment rate now.

UPDATE: CNN in utter disbelief after Chicago went down in the first round–

UPDATE 2: Axelrod spins the news– Says Obama will go anywhere to promote the country… Except when he bashes it.

UPDATE 4: The Times Online piles on:
“Obama’s Olympic failure will only add to doubts about his presidency”

UPDATE 5: You knew this was coming– It’s Bush’s fault.