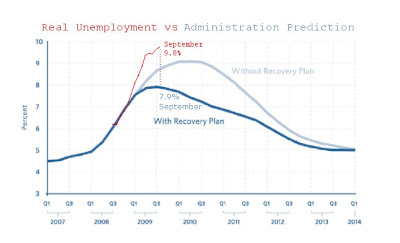 Barack Obama told America that if his $787 billion stimulus bill was passed the unemployment rate would stay under 8%.
…Maybe he meant 9.8%?

Most Americans understand today that the Obama-Pelosi Stimulus Plan was a dud.
The Politico reported:

Perceptions of the effectiveness of President Barack Obama’s $787 billion stimulus package differ dramatically between racial groups, according to a new poll released Tuesday.

The poll, sponsored by New America Media, a corroboration of 2,500 ethnic media outlets, reported that less than 40 percent of whites, Hispanics and Native Americans said the stimulus has made the economy better, compared to 59 percent of African-Americans and 47 percent of Asian-Americans.

Among the overall sample of 1,000 respondents, 40 percent said the stimulus has made the national economy better.

“The American public currently believes that the stimulus package has not had a major impact on the national economy,” wrote pollster Sergio Bendixen in his analysis of the survey. “Only African-Americans believe that President Obama’s stimulus package ‘has made the economy better.’”

Obama and democrats spent billions this year on their stimulus plan and all we got was another trillion dollars in debt. 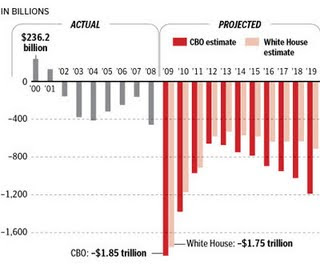 It looks like you can’t spend your way out of a recession, after all.