Author, broadcaster and filmmaker (Media Malpractice: How Obama Got Elected and Palin Was Targeted) John Ziegler was kicked out of the Western Conservative Political Action Conference this afternoon after his interview with David Keene, chairman of the American Conservative Union. John had scheduled an interview with David Keene and all was going well until John asked David about this report from July.

According to HotAir the American Conservative Union attempted to get Federal Express to pay millions of dollars to engage the ACU on their behalf over a political fight with UPS on legislation under consideration on Capitol Hill. The Politico also reported on this controversy… David got upset with John’s question and threatened to clobber him. The whole thing was captured on tape.

In this video John tells me about the interview and confrontation:

After the interview and some drama in the hallway, Western CPAC officials told John Ziegler he was kicked out.
After lunch the local police were called and escorted John Ziegler out of the parking lot. But first there was a major confrontation in the banquet tent at the Radisson Hotel.

Rachel Alexander posted photos on her Facebook page. Here’s one– 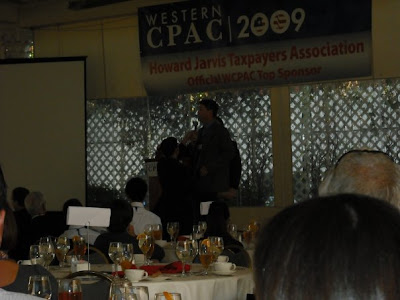 UPDATE: I spoke with John Ziegler tonight and he told me that video from the interview and the episode in the tent will be posted on YouTube tonight or tomorrow.