“Obama says everyone needs health coverage in America now.
We need to insure those 47 million but the government doesn’t know how.
I got my bill and think, no way.
And, what about my brother?
He’s hurting and can’t get covered.”

It’s come to this…
The mainstream media is now using a kids school to push Obamacare:

Kids from the Ron Clark Academy are on CNN singing for health care reform set to Miley Cyrus’ “Party in the USA.” The song mentions “Obama says everyone needs health care now.”

These same kids sang out for “Obama helping the middle class” last year before the 2008 election. 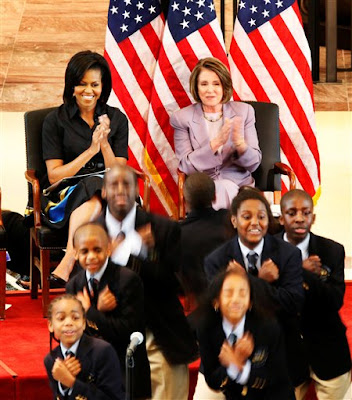 First lady Michelle Obama, left, and House Speaker Nancy Pelosi, right, clap to the beat of the performance by students of the Ron Clark Academy of Atlanta, Ga., during the unveiling ceremony of a bust of abolitionist Sojourner Truth in the Emancipation Hall of the U.S. Capitol, Tuesday, April 28, 2009, in Washington. (AP Photo/Manuel Balce Ceneta)

UPDATE: Despite the extreme pro-Obama environment at the school at least one of the kids has a grasp of reality.