CHANGE!
The Tibetans become the latest persecuted group to be rejected by President Obama. 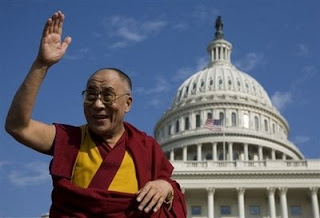 This file photo from 2007 shows the Dalai Lama greeting supporters in front of the Capitol in Washington, DC. The Dalai Lama was sweeping into Washington for a week-long visit that will see him confer with US lawmakers and reach out to ethnic Chinese, but not meet with President Barack Obama. (AFP/Mandel Ngan)

For the first time since 1991, Barack Obama snubbed the Dalai Lama today due to pressure from the communist Chinese government.
Obama will not meet with the Dalai Lama this week in Washington DC.
The Indian Express reporeted:

In an attempt to gain favour with China, for the first time since 1991 the US President will not meet Tibetan spiritual leader Dalai Lama when he visits Washington this week.

President Barack Obama who is scheduled to undertake his first visit to China next month has apparently decided not to meet the Dalai Lama son as not to annoy Beijing.

“The US pressured Tibetan representatives to postpone a meeting between the Dalai Lama and President Obama until after Obama’s summit with his Chinese counterpart, Hu Jintao, scheduled for next month,” Washington Post reported.

The Dalai Lama has met every sitting US president since George Bush senior in 1991. China accuses the Dalai Lama of being a ‘splittist’ aiming to separate Tibet from it.

The last time Dalai Lama was here, in 2007, however, George W Bush became the first sitting President to meet with him publicly, at a ceremony at the Capitol in which he was awarded the Congressional Gold Medal, Congress’s highest civilian award.

Let’s see…
Iranians, Hondurans, Poles, Czechs, Colombians and now the Tibetans are the latest group to be rejected by President Obama.
How’s that for hope and change?