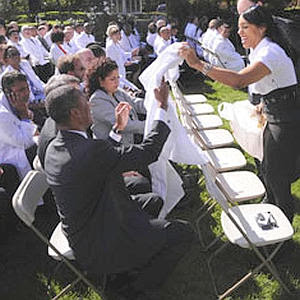 OOPS! A crowd of 150 doctors gathers in the Rose Garden to support the health-care overhaul — as White House staffers scramble to hand out camera-ready white coats to those who forgot their own. (New York Post)

Obama met with a group of doctors on the White House lawn today. 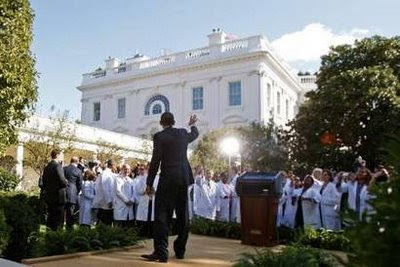 (Reuters)
What the media won’t tell you is that the doctors were former members of the “Doctors for Obama” organization.

150 doctors including supporters from Doctors for America, the former Doctors for Obama organization, assembled on the White House lawn today for a Astroturfed show with the president.
FOX News reported:

The doctor made a White House call Monday — 150 of them, in fact, all costumed in white hospital coats — to try to help President Obama administer a booster shot to his ailing health care reform drive.

White House spokesman Reid Cherlin described the assembled physicians, from all 50 states, as the best voices for reform because they witness the current health care system on a day-to-day basis.

“These folks know better than anybody about what works and what doesn’t,” Cherlin told FOXNews.com, adding that the physicians come from “a variety of groups that we work with.”

But the doctors in the Rose Garden were all supporters of health care reform — and the invitation-only guest list drew heavily from Doctors for America, a grassroots organization that backs a government-run insurance option.

Roughly 98 percent of the group’s 15,000 members support a public insurance option, Doctors for America spokeswoman Megan Smith told FOXNews.com. She said roughly 40 of the 150 doctors who attended the meeting were from the organization.

Cherlin insisted that the doctors “were not invited based on their support for a public option.”

So the White House said the doctors were not invited based on their support?
Yeah right.