Now we know why Chicago lost out–
The IOC did not appreciate Obama’s arrogance. 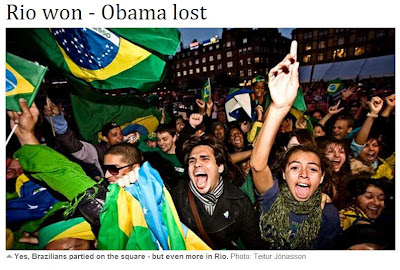 (Photo from Berlingske)
Don Surber posted the translation from the Danish website Berlingske:

“The fact that Barack Obama came, could not do it. I think he lacked emotion, it seemed too empty and business-like. When Tony Blair promoted London he was around three days to lobby and talk to people. You can not just come with the train one day and try to affect everything. People have felt that it was a lack of respect for the Olympics and sport in general. I think people felt it was too business-like to get into the way we have now seen it many times, and you would have feelings back.”

Hans Bonde, professor of sport history at the University of Copenhagen, told the newspaper: “Here come the media favorite Obama just before the deadline and made showoff. He clearly won the battle in the media, but it turned out indeed to be indifferent. IOC members did not feel important, and they were indeed reduced to spectators and not players.” 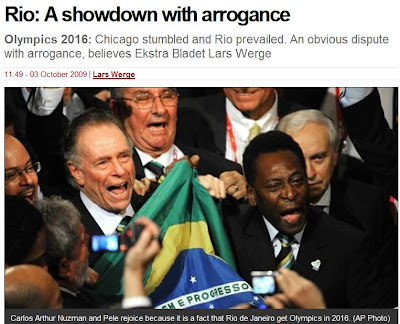 It took the former Danish IOC member Kai Holm less than one round of counting to determine that Chicago was the victim of his own disrespect.

Quite remarkably Holm could tell it, all others considered as an advantage in the Olympic optics was a disadvantage. The world’s mightiest man’s visit was not an expression of humility and a desire to make the Olympic idea of American and global momentum.

No, it had instead said that Obama does not take the IOC and the Olympic ideals seriously. Having Understood: The American President should have spent more days to ‘massage’ IOC members’ sense of self, so maybe Chicago had won instead.

Of course… This won’t stop top democrats from blaming Bush for the major embarrassment.