President Obama graciously gave his top Afghanistan general 25 minutes of his time aboard Air Force One after flying for 10 hours to promote Chicago to the IOC. 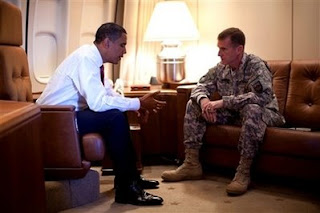 The British Foreign Secretary David Miliband told Obama to back your generals and send more troops to Afghanistan.
The Times Online reported:

David Miliband urged President Obama to embrace a renewed “hearts and minds” strategy in Afghanistan as ministers indicated that they would not send more British troops unless the US adopted such an approach.

The Foreign Secretary did not mention America by name but called on every government in the coalition to back troops, aid workers and diplomats in support of a clear plan. “We came into this together. We see it through — together,” he told the Labour conference in Brighton.

His words reflect a growing concern in the Government over Mr Obama’s apparent reluctance to garner political consent for a troop “surge”, which commanders say is needed to build up the Afghan Army and defeat the Taleban insurgency. General Stanley McChrystal, the top commander in Afghanistan, wants a revamped counter-insurgency — more forces on the ground engaging civilians and persuading the Taleban to switch sides — as opposed to a counter-terrorism strategy focused on al-Qaeda — reducing troop numbers and attacking militants mostly with drone missile strikes.

Also… The head of the British Army warned of a “terrifying prospect” if Afghanistan fails.
The Telegraph reported:

Army chief warns of ‘terrifying prospect’ of failure in Afghanistan

The head of the British Army, General Sir David Richards, has issued a wake-up call to the public by warning of the “terrifying prospect” of a defeat in Afghanistan.

In an unprecedented intervention, the chief of the general staff described the conflict as “this generation’s war” and added that failure by Nato would have an “intoxicating effect” on militant Islam.

In his first interview as the head of the Army, Sir David told The Sunday Telegraph that if Britain and Nato failed in Afghanistan the risks to the western world would be “enormous” and “unimaginable”.

The general’s intervention comes at a crucial time, with the US General in charge of operations in Afghanistan calling for more troops to be sent to the country to fight the Taliban.

At home, the Government has come under increasing pressure for the way it has handled the war, with critics saying the armed forces have been under-resourced.