How do you like your change now?
They are coming for you! The Taxpayer 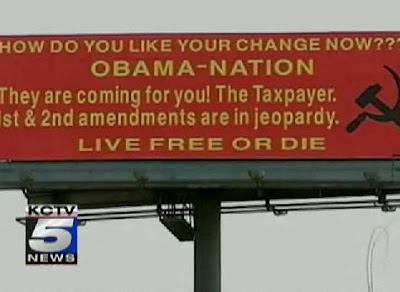 Free Republic and Communists4Obama reported on this news from KCTV in Kansas City:

Drivers on Interstate 70 can barely see the billboard but once they do the message has been gaining attention.

The billboard is located along I-70 between the Adams Dairy Parkway and the Grain Valley exits. The billboard reads, “How do you like your change now? Obama Nation. They are coming for you! The Taxpayer. First and Second Amendments are in jeopardy. Live free or Die.” There is also a hammer and sickle on the sign.

People said they might not agree with the sentiment of the sign, but they felt it was a matter of free speech. Others that KCTV5 talked to said it is offensive and should come down.

A pastor who drives by the sign during his daily commute to his church said he lived in England for years and he agreed with the message.

“We lived in a socialist society and I guess what I am seeing in America is that we are pushing to some of those ways now,” he said. “Especially the hospitalization. It’s taken away some of our freedoms as Americans.”

NBC Action News wants to know what you think:

It must be racist.