85,000 Civilians Were Killed During Iraq War By Acts of Terror… Not One Million …Update: Bush Saved 750,000 Iraqis 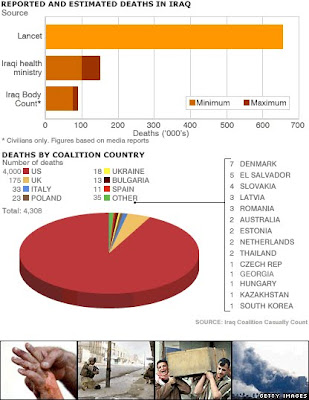 The Iraqi government reported today that 85,000 Iraqis were killed between 2004 and 2008. This was the government’s first official tally released since the war began in 2003.
The AP reported:

At least 85,000 Iraqis lost their lives from 2004-2008 in violence, the government said in its first comprehensive tally released since the war began.

The report by the Human Rights Ministry said 85,694 people were killed in the four-year period and 147,195 were wounded. It counted Iraqi civilians, military and police but did not cover U.S. military deaths, insurgents, or foreigners, including contractors or U.S. forces. And it did not include the first months of the war after the 2003 U.S.-led invasion.

The Associated Press reported in April that the government had recorded 87,215 Iraqi deaths from 2005 to February 2009, a toll very similar to the latest release. It was based on government statistics obtained by the AP and covered violence ranging from catastrophic bombings to execution-style slayings.

Until the AP report, the government’s toll of Iraqi deaths had been one of the most closely guarded secrets of the war. It has been hotly disputed because of the high political stakes in a war opposed by many countries and by a large portion of the American public. Critics on each side accuse the other of manipulating the toll to sway public opinion.