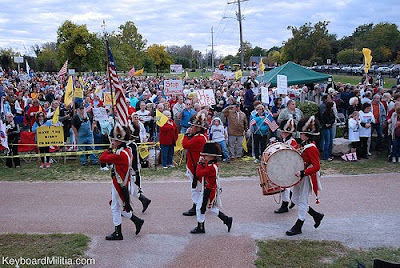 From health care reform to taxes, all kinds of issues came under the microscope Friday night in St. Charles. The first St. Charles County Tea Party was held in Frontier Park along the riverfront. Estimates put the crowd anywhere from about 1000 up to 2000. Many of the people who turned out for the Tea Party came armed with signs.

Some of the signs were critical of President Obama’s health care reform plan.

Others targeted spending and future elections.

The Rice’s from South County say the President’s health care plan scares them.

“I’m worried about when I do get to retire, am I going to have healthcare. I don’t want to pay an arm and a leg for it. And I don’t want the government to tell me when I’m going to die,” said bill rice. Nancy Gruendl from Dardenne Prairie says she’s mad at all of the politicians in Washington- Republicans and Democrats.

Nancy told us, “I don’t care what side of the aisle they’re on, they’ve all sold us out. We need politicians who believe in this country and us as a people.”

One of the organizers of the event, Cindy McGee, admits most of the crowd here does lean conservative. But she says the Tea Party movement isn’t about party politics. Rather, she tells us it’s about giving people an opportunity to speak their minds. 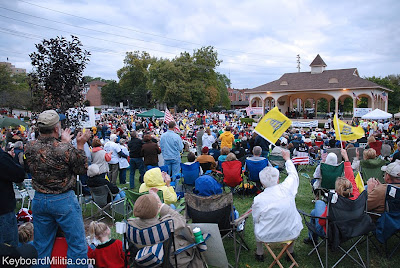