Here’s The Latest From the Obama-Marxist Alliance Against Honduras–

This interview with the US Ambassador Hugo Llorens and Deputy Mission Chief Simon Henshaw was recently published in The Narco News Bulletin. It was sent to me from a Honduran official who is concerned about the misinformation coming out against the legitimate and democratic Honduran government and President Roberto Micheletti.

The Honduran Congress and Supreme Court along with the military ousted Leftist President Manuel Zelaya from power after his illegal moves to secure his presidential post as a lifetime position. Zelaya was, of course, supported by local Leftist regimes in Venezuela, Bolivia, and Cuba.

The Obama Administration has misread the law and is siding with the Marxist regimes against Honduras. 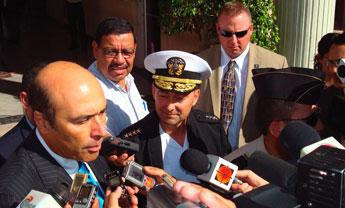 US Ambassador to Honduras Hugo Llorens.
Photo 2009, US Southern Command.

In a shocking move the US government, for the first time in history, has sided with Marxist leaders Hugo Chavez, Daniel Ortega, Raul Castro, Evo Morales against the pro-democratic Micheletti.
Birds of a feather… 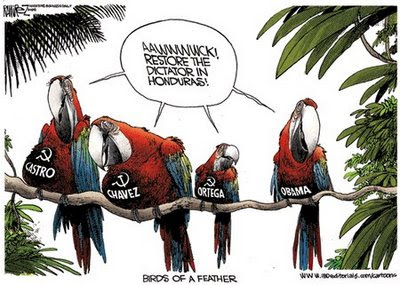 (Michael Ramirez)
Barack Obama is openly siding with regional Marxists and is punishing the government and people of Honduras who ousted their Leftist dictator wannabe.

In this interview Ambassador Llorens talks with a representative from Global Exchange.

While awaiting the arrival of United States Ambassador to Honduras Hugo Llorens to a meeting at the US embassy in Tegucigalpa Friday morning, Deputy Mission Chief Simon Henshaw spoke to an American human rights delegation from Global Exchange. The meeting had been organized by Andrés Conteris, founder of Democracy Now! en Español, who had managed to get me into the embassy despite the fact that I was not on the list and that my shoes set off the metal detector.

In response to Global Exchange’s concern for current human rights violations in Honduras such as police beating of marchers opposed to the coup that ousted President Manuel Zelaya on June 28, Henshaw announced that the delegation was “preaching to the converted” and that “we condemn the [coup] regime and think they’re thugs.” Henshaw’s subsequent declaration that “the first issue is that [the Honduran coup] was a coup and that it was a military coup and that it was wrong” suggested that the US State Department had finally reached a consensus on the nature of the events of June 28 after debating for 48 days whether the coup was military. The consensus was called into question with the arrival of Ambassador Llorens and his exchange with Joe Shansky of Democracy Now! en Español:

LLORENS: It’s a clear-cut case of a coup.

LLORENS: Well, whatever you call it.

Llorens went on to explain that—regardless of whether you called it a coup, a military coup, or a coup d’état—“it’s horrible,” and that coup President Roberto Micheletti was comparable to Napoleon given the zeal with which he had grabbed the Bible and sworn himself in as president of Honduras. As for why Napoleonic behavior had not triggered the freeze in US aid required by Section 7008 of the US Foreign Operations Law, Llorens momentarily supplanted the discussion of millions of dollars flowing into Honduras courtesy of US-funded Millenium Change Corporation (MCC) with a discussion of how the joint US-Honduran military base at Soto Cano had been shut down.

…Appointed by George W. Bush, Ambassador Llorens appears to have adopted the Bush-era reliance on comedy and incorrect verb tenses in the forging of diplomatic relations, such as in the following discussion with Allan Fisher this morning:
FISHER: Did you meet with [Honduran] military leaders before the coup?
LLORENS: Yes, we do. We have contact.
FISHER: So you knew about the coup, or had an inkling?
LLORENS (laughs): No, no, not really.
Further humor occurred when Andrés Conteris asked whether it was four or five diplomatic visas that the US had revoked from the Honduran coup regime and Llorens chuckled: “I think it’s four.”

Near the conclusion of the meeting, Llorens reminded us that social justice is a great thing and implied that he had chosen to speak to us intimately rather than as a public official delivering official information. One of his intimate observations had been that a person could spend years building up a reputation and then destroy it in a minute, a reference to a coup official who had demonstrated considerable bravery in the 1980s but had recently had his diplomatic visa revoked by the US. It appears that Llorens’ own reputation has not undergone any fundamental change, as he was President Bush’s National Security Advisor on Latin America during the 2002 coup against Venezuelan President Hugo Chávez.