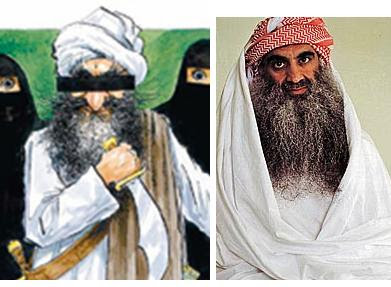 A recently released photo of 9-11 mastermind Khalid Sheikh Mohammed flanked by one of the infamous Danish Muhammad cartoons.

This year 9-11 will be different.
The Obama Administration has decided to turn 9-11 into an “Interfaith Day of Service.”
Pamela Geller at The American Thinker reported:

Add another Obama insult to injury on 9-11. First, he desecrated the memory of 9-11 with his planned proclamation of his mandatory civilian service on 9-11, which he has designated a “National Day of Service.” And now 9-11 has yet another title: State Department personnel are supposed to pray with Muslims on the newly declared “Interfaith Day of Service,” whatever that means on 9-11…

…An unclassified State Department “action request” encourages State officials to “consider organizing an Interfaith Day of Service in their host countries as a way to commemorate the anniversary of the tragic events of September 11, 2001.”

American Thinker goes on to report that because of Ramadan some of these commemorations will not be held on 9-11 itself.