Don’t look for the media to say diddly about this nasty attack.
And, don’t look for Speaker Pelosi to scold this liberal representative for his awful and dishonest hate speech.

Partisan fool, Rep. Alan Grayson, said Republicans want patients to “die quickly” on the floor of the US House of Representatives:

Rep. Grayson is not just offensive but he is terribly inaccurate.

Compared to the US countries with nationalized health care see more women die from breast cancer, see more preemie deaths and see hundreds of patients die each year while waiting in line for treatment.
Rep. Grayson was not just offensive… He was wrong. 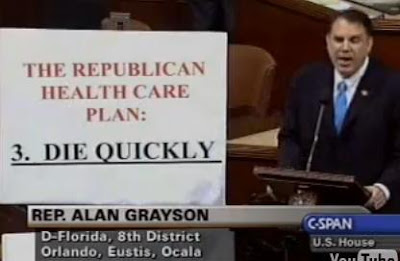 At least when Republicans accuse the president of lying to Congress, they’re telling the truth.