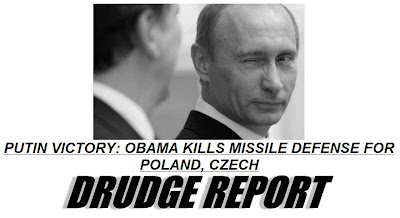 Obama has scrapped the missile defense shield for US allies Poland and the Czech Republic.
The AP reported:

President Barack Obama has decided to scrap plans for a U.S. missile defense shield in the Czech Republic and Poland that had deeply angered Russia, the Czech prime minister confirmed Thursday.

NATO’s new chief hailed the move as “a positive step” and a Russian analyst said the move will increase the chances that Russia will cooperate more closely with the United States in the dispute over Iran’s nuclear program.

Premier Jan Fischer told reporters that Obama phoned him overnight to say that “his government is pulling out of plans to build a missile defense radar on Czech territory.”

“The same happened with Poland. Poland was informed in the same way about this intention,” Fischer said.

Under the plan, which had been proposed by the Bush administration to defend the United States and its European allies against a possible missile attack from Iran or elsewhere in the Middle East, 10 interceptor rockets were to have been stationed in Poland and a radar system based in the Czech Republic.

In November 2008, less than one year ago, Polish President Lech Kaczynski’s office said Obama pledged to go ahead with the US missile defence system in Poland. But, by March Obama wrote Russia and was ready to scrap the program.
Now its official.

UPDATE: Europe is angered by this latest Obama move.