The ACORN doesn’t fall far from the SEIU tree…
A California SEIU boss was sentenced to 25 years in prison after pleading guilty to charges of child molestation. 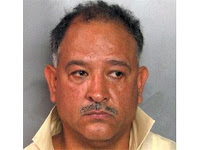 Jaime Feliciano represented thousands of SEIU members.
Hummers and Cigarettes reported on this story from News10:

A former union official and California Department of Insurance employee was sentenced Tuesday to 25 years in prison after entering no contest pleas to charges of child molestation, possession of child pornography, and manufacturing child pornography.

Jaime Enrique Feliciano, who served as a chapter president of Service Employees International Union Local 1000, which represents thousands of Sacramento-area state workers, had previous convictions for child molestation and failure to register as a sex offender.

In September 2008, investigators with the Sacramento County Sheriff’s Department initiated an investigation into Feliciano following a tip. Deputy District Attorney Lani Biafore said detectives recovered thousands of images of child pornography from Feliciano’s computers, as well as images of him molesting a young girl.

Don’t expect this to get much play from the state-run media.