From Poland’s Daily News Fakt—
“Treason! We’ve Been Sold to the Russians” 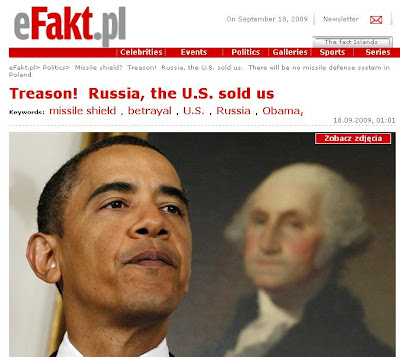 This is from today’s Fakt Daily News on Obama’s decision to turn his back on another American ally:

Strategic ally? Mainstay of our security? End of illusions. United States of America, for which we have for each call, turned his back to us. U.S. President lightly tossed into the trash heap construction of the Poland and the Czech anti-missile shield. The massive military installation was to give special meaning to us in NATO and to strengthen our position towards Russia. But America, instead of Warsaw, he prefers dialogue with Moscow. Yesterday the whole world went round decision Barack Obama Kremlin triumphs, and the Poles have been exposed to the wind.

The Poles are the latest US ally to be outraged by the actions of our misguided president.
“The AP reported, via Drudge:

“Betrayal! The U.S. sold us to Russia and stabbed us in the back,” the Polish tabloid Fakt declared on its front page.

Recent events in the region have rattled nerves throughout central and eastern Europe, a region controlled by Moscow during the Cold War, including the war last summer between Russia and Georgia and ongoing efforts by Russia to regain influence in Ukraine. A Russian cutoff of gas to Ukraine last winter left many Europeans without heat.

The Bush administration’s plan would have been “a major step in preventing various disturbing trends in our region of the world,” Kaczynski said in a guest editorial in the daily Fakt and also carried on his presidential Web site. 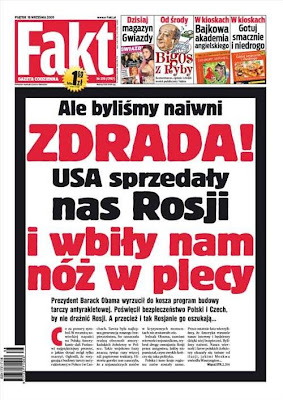 Polish Prime Minister Donald Tusk confirmed on Thursday that he would not take a call from the U.S. informing him of the decision to scrap planned missile-defense bases.