Since when is this safe?
Barack Obama’s “safe school’s czar” Kevin Jennings hid pedophilia from authorities. 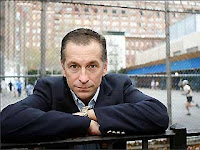 President Obama’s “safe schools czar” is a former schoolteacher who has advocated promoting homosexuality in schools, written about his past drug abuse, expressed his contempt for religion and detailed an incident in which he did not report an underage student who told him he was having sex with older men.

Conservatives are up in arms about the appointment of Kevin Jennings, Obama’s director of the Office of Safe and Drug Free Schools, saying he is too radical for the job.

Jennings was appointed to the position largely because of his longtime record of working to end bullying and discrimination in schools. In 1990, as a teacher in Massachusetts, he founded the Gay, Lesbian and Straight Education Network (GLSEN), which now has over 40 chapters at schools nationwide. He has also published six books on gay rights and education, including one that describes his own experiences as a closeted gay student.

The OSDFS was created by the Bush administration in 2002. According to its Web site, one of its primary functions is to “provide financial assistance for drug and violence prevention activities and activities that promote the health and well being of students in elementary and secondary schools, and institutions of higher education.”

Jennings’ critics say he fits only half the bill, if that.

“Jennings was obviously chosen for this job because of the safe schools aspect… defining ‘safe schools’ narrowly in terms of ‘safe for homosexuality’,” Peter Sprigg, a senior fellow at the Family Research Council, told FOXNews.com.