Madeleine Albright: “Democracy is not the perfect system. It can be corrupt.” 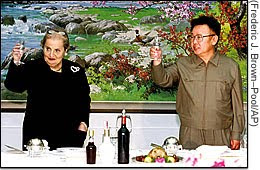 Madeleine Albright, a democratic expert on foreign policy, let her hair down during a recent speech to Russian students in Omsk. The former Secretary of State told her audience that America no longer had the intention of being the first nation of the world.
Pravda reported the news that the US media ignored:

Madeleine Albright said during the meeting that America no longer had the intention of being the first nation of the world.

Ms. Albright started her speech in Russian. “Hello and thank you! It’s a pleasure for me to be here,” she said in Russian. Albright wrote in her autobiography that she was trying to learn some Russian during the 1960s.

The former US Secretary of State surprised the audience with her speech. She particularly said that democracy was not the perfect system. “It can be contradictory, corrupt and may have security problems,” Albright said.

America has been having hard times recently, Albright said.

“We have been talking about our exceptionalism during the recent eight years. Now, an average American wants to stay at home – they do not need any overseas adventures. We do not need new enemies,” Albright said adding that Beijing, London and Delhi became a serious competition for Washington and New York.