After the Alinsky democrats in Congress and the White House stun the country by ramming through nationalized health care it looks like immigration will be one of the next items on this year’s agenda.
Obama promised to reshape America.
That’s one promise he’s keeping.

The radical Jan Schakowsky (D-IL) told Illinois Coalition for Immigrant and Refugee Rights (I.C.I.R.R.) supporters at a press conference in Chicago that soon the democrats will begin work on immigration “reform.”
If they haven’t destroyed the economy by Christmas this ought to help. 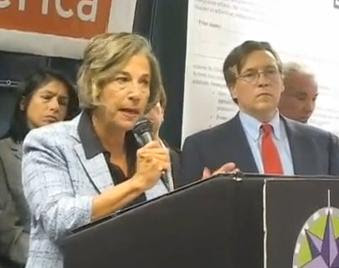 Story Balloon has the full transcript:

The President of the United States, Barack Obama, who by the way as a senator supported and cosponsored many pro comprehensive immigration reform pieces of legislation, said on august 20th at a meeting where Janet Napolitano, the Sec’ of Homeland Security was there. “We can get this done” That’s what he said talking about comprehensive immigration reform. So why? Looking forward to that day, soon, when were going to begin our work …hopefully this year, on immigration reform.. Why would the gov’ persist in these policies of deportation of dividing families of going into work places and deporting employees. These incredibly harsh detention facilities that are there and treating people like criminals. This is just wrong and I think that not only the people here but many of my colleagues in congress agree that it is time to fix this system. To allow students through the Dream Act to continue their education. To have comprehensive reform and to STOP RIGHT NOW these detentions, deportations, separations of families.That’s what we are working on and we are not going to stop until we win.”