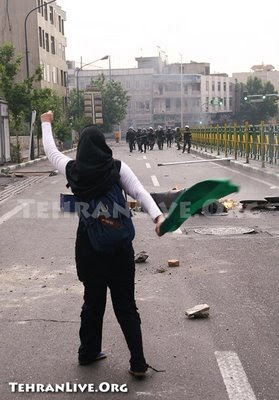 Iranian freedom fighters Banafsheh Zand-Bonazzi, Shohreh Nazar and Roya Teimouri speak out against the Iranian regime at the United Nations on Thursday September 24, 2009.
(Roya is speaking in English at the beginning of this clip. Shohreh is speaking in Farsi the last 2 minutes of the video clip.)
Roya Teimouri gave a powerful speech:

“I have a message for President Obama and Ban Ki Moon and all of the members of the United Nations. Wake up! Smell the blood! The people of Iran are being killed on a daily basis for a simple freedom. They want their vote to be counted. They don’t want this regime in Iran.” 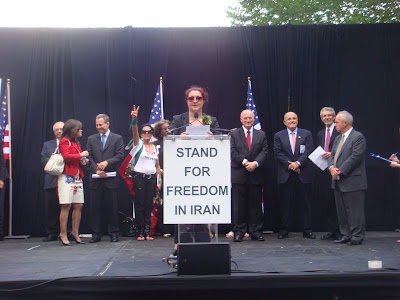 Iranian Human Rights Activist Banafsheh Zand-Bonazzi read a translation to the crowd at the Stand For Freedom With Iran Rally outside the United Nations in New York this past week. Former Mayor Rudy Giuliani, in the background, also spoke after the Iranian women.