Gaddafi praises “our son” Obama during his talk today. 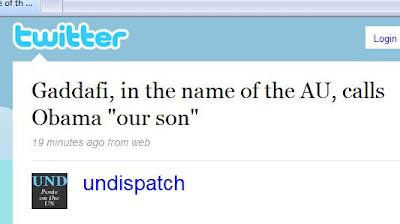 The Libyan tyrant wants Obama to be president forever.
…Just like him.
The Hill reported:

Libyan President Muammar al-Qadhafi showered Barack Obama with unexpected praise on Wednesday, telling the U.N. General Assembly he hoped Obama “can stay forever as the president of the United States.”

It was, perhaps, the only kind words Qadhafi had for anyone in his hour-long speech, during which he vented against what he called the “inequality” of the United Nations.

“You are the beginning of a change,” the Libyan leader said of the U.S. president. “But as far as I’m concerned, Obama is a glimpse in the dark for the four years or the next eight years, and I’m afraid that we may go back to square one. How can you guarantee America after Obama?”

“We are content and happy if Obama can stay forever as the president of the United States of America,” he added.