Hardliners attacked former Iranian President Khatami today in Tehran.
They ripped off his turban and tore his robe but he was not hurt. 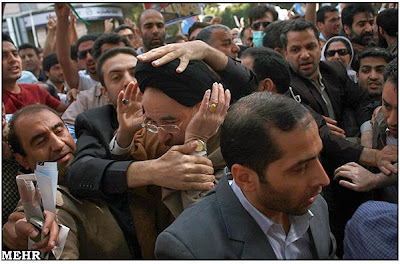 Supporters of the opposition leader Mir Hossein Mousavi fought running battles with riot police and hardliners on the streets of Tehran today as tens of thousands joined the first protests against President Ahmadinejad for two months.

The demonstrators defied warnings of a “decisive” crackdown from the elite Revolutionary Guard to mount the protest during the annual al-Quds rally, a mass display of solidarity with the Palestinians that is one of the set pieces of the Islamic regime.

Mr Mousavi himself was forced to abandon his own plans to join in the rally after an angry mob shouting “Death to the hypocrite Mousavi” attacked his car.

Another leading reformist, the former president Mohammad Khatami, was also roughed up on the streets of Tehran and had to leave after his robe was ripped and his turban fell to the ground.

So much for the hope and change… 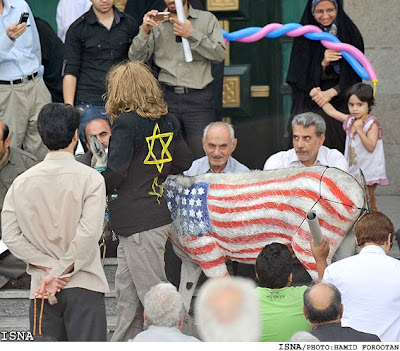 The hardliners paraded an ass painted with a USA flag down the street on Qods Day. (ISNA)

Michael Ledeen is liveblogging the action on the streets of Iran today.