Barack Obama was too busy to visit Ground Zero on 9-11.
Instead he painted a living room. 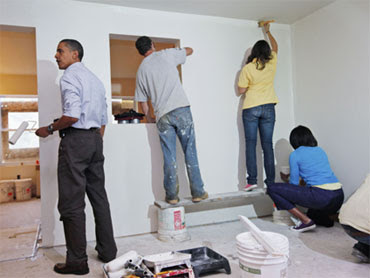 In a few months time, some family is going to be able to boast that the living room of their refurbished home was painted by the President and Mrs. Obama.

Wielding paint rollers and brushes, the Obamas laid down an even coat of “Cool Platinum” wall paint.

“you know, I don’t think anyone will have to re-do it, I hope,” said Mr. Obama as he finished one section of the back wall and stepped back to assess his work.

The First Couple was commemorating the 8th anniversary of the 9/11 attacks, which this year is designated a National Day of Service and Remembrance.

This really isn’t that surprising.
The Obama White House wanted to remake 9-11 as a socialist holiday this year.