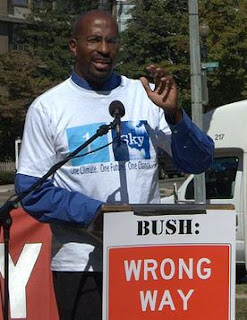 And, don’t cut albums with cop-killers.

After the resignation of his communist-Truther Green Czar this past weekend Barack Obama told students today to be careful what you post online.
MSNBC reported:

During a Back-to-School event with students at Wakefield High School in Arlington, Va., the president was asked what advice he would give to a young person who hopes to one day be president.

Be careful what you post on Facebook, because whatever you do, it will come up later in your life, Obama told a class of about 30 ninth-graders gathered in the school library.

“I’ve been hearing a lot about young people who, you know, they’re posting stuff on Facebook and then suddenly they go apply for a job and somebody’s done a search and, you know, so that’s some practical political advice,” Obama said.

The president’s warning was in line with the kind of advice many parents and employers have been giving young people for some time since pictures, video and text posted on the Web can live forever. In fact, a video posted on YouTube that captured derogatory comments about Republicans by green jobs czar Van Jones contributed to the controversy that forced his resignation over the weekend.

And, what ever you do– Don’t sign any Truther petitions!