4 US Marines Sacrificed For Political Correctness? 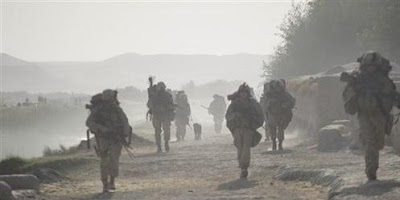 The four US Marines who were killed in eastern Afghanistan last week may have been sacrificed for new rules of political correctness.
The incident is currently under investigation.
The Military Times reported:

NATO-led forces are investigating the death of four Marines in eastern Afghanistan after their commanders reportedly rejected requests for artillery fire in a battle with insurgents, the Pentagon said on Wednesday.

A McClatchy newspapers’ journalist who witnessed the battle reported that a team of Marine trainers made repeated appeals for air and artillery support after being pinned down by insurgents in the village of Ganjgal in eastern Kunar province.

The U.S. troops had to wait more than an hour for attack helicopters to come to their aid and their appeal for artillery fire was rejected, with commanders citing new rules designed to avoid civilian casualties, the report said.

Morrell said the helicopters were not hampered by any restrictions on air power but had to travel a long distance to reach the Marines at the remote location near the Pakistan border.

“I think that it did take some time for close air support to arrive in this case, but this is not a result of more restrictive conditions in which it can be used,” he said.

“It was the result, as is often the case in Afghanistan, of the fact that there are great distances often between bases where such assets are located and where our troops are out operating.”

Morrell could not confirm whether appeals for artillery fire were denied by commanders.