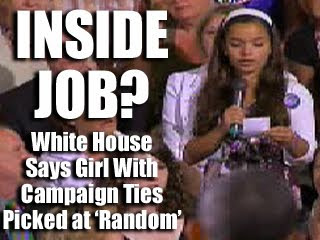 (FOX News)
The White House said the audience members at yesterday’s town hall in New Hampshire were picked randomly by computer.
Even the ones that were bussed in.
FOX News reported:

The friendliness of the audience at Obama’s event was in stark contrast to the often rowdy and antagonistic crowds that attended similar events held around the country by members of Congress.

As an organizer and donor, Manning Hall had previously met first lady Michelle Obama, Obama daughters, Sasha and Malia, and Vice President Biden, according to a report published Wednesday in the Boston Globe. And her daughter also attended this year’s White House East egg hunt, according to WCVB-TV, the ABC affiliate in Boston…

Julia Hall’s question at the town hall meeting prompted Obama to attempt to refute what he called the “underlying fear” among Americans “that people somehow won’t get the care they need.”

On Wednesday, White House Press Secretary Robert Gibbs acknowledged that many audience members were friendly to Obama’s message, but he said the president chose questions at random. He reiterated the administration’s earlier announcement that anyone could sign up for the free tickets through the White House Web site and said winners were picked “randomly by computer.”

“The president asked people to raise their hands and he picks on them,” Gibbs told reporters, adding, “I’m sensing your disappointment that he didn’t get yelled at.”