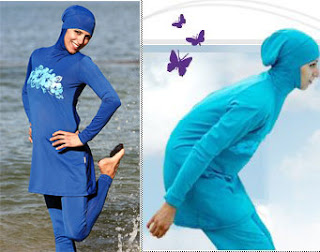 Under the rules, swimmers – including non-Muslims – are barred from entering the pool in normal swimming attire.

Instead they are told that they must comply with the “modest” code of dress required by Islamic custom, with women covered from the neck to the ankles and men, who swim separately, covered from the navel to the knees…

…Across the UK municipal pools are holding swimming sessions specifically aimed at Muslims, in some case imposing strict dress codes.

Swimmers were told last week on the centre’s website that “during special Muslim sessions male costumes must cover the body from the navel to the knee and females must be covered from the neck to the ankles and wrists”.

There are similar rules at Scunthorpe Leisure Centre, in North Lincolnshire, where “users must follow the required dress code for this session (T-shirts and shorts/leggings that cover below the knee)”.