Today’s Hope and Change…
Figures. Julia Hall from Malden MA, the little girl who asked Obama a question today at his town hall meeting, was a plant.

Julia Hall’s mother, Kathleen-Manning-Hall, is Big Obama supporter and donor.
Check out the woman sitting next to Julia today:

The second person “randomly” selected to ask a question was a young girl called Julia Hall from Malden MA (asks question at 29m:25s).

Julia read the following question off a piece of paper: “As I was walking in I saw a lot of signs outside saying mean things about reforming healthcare. How do kids know what is true and why do people want a new system that can help more of us”.

This randomly asked question gave Obama the perfect opportunity to dismiss talk about “death panels that will pull the plug on Grandma” and to blame Republicans for everything.

Over on the town hall comments thread AtomicPunk09 discovered someone on facebook who might possibly be Julia’s mother and had a photo of her with Obama.

Another “coincidence” is that Julia said she lives in Malden MA and Kathleen Manning Hall’s campaign contributions list the occupation “Legal Asst, Looney and Grossman LLP” and a home address in Malden MA, via the Huffington Post donation’s page.

Here’s another shot of Julia’s mother Kathleen at an Obama Inaugural event: 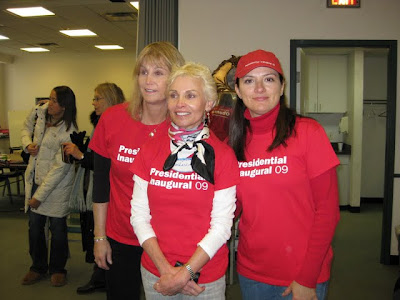 Here’s Kathleen in Washington DC for the Inauguration: 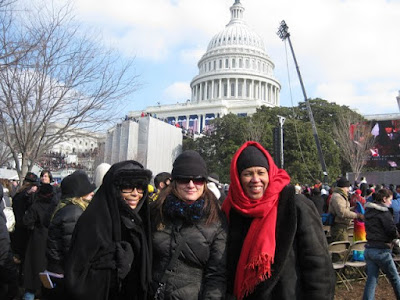 Bummer. And here we thought Dear Leader was being so authentic and spontaneous at his town hall meeting today.

Kathleen Hall’s Facebook friend is Addisu Demissie, National Political Director of Organizing for America and former Ohio Get out The Vote director of Obama for America.

Kathleen attended the Eastern Ball which the Obamas and Bidens also attended.