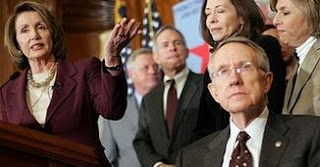 Reid coined the term in a speech to an energy conference in Las Vegas this week and repeated it in an interview with Politics Daily.

Such “evil-mongers” are using “lies, innuendo and rumor,” to drown out rational debate, Reid said.

“It was an original with me,” Reid said of the term. “I maybe could have been less descriptive,” he said, adding that “I doubt you’ll hear it from me again.”

Nevertheless, Reid worked in the word one more time during the interview.

“I feel I haven’t done anything to embarrass [my children],” Reid joked. “Except maybe call somebody an evil-monger.”

Power Line had more from Harry Reid’s interview with Jill Lawrence today.
Reid was chuckling about ramming Obamacare through the Senate:

If the bill doesn’t have a public insurance plan to compete with private ones, do the insurance companies win? I asked. “The public option is something that the vast majority of Americans want. They know that the enemy is the insurance industry,” Reid said. But he added that the public option “is not the only thing that’s important.” It’s also important, he said, to make sure insurance companies can’t deny policies to people who have pre-existing conditions or drop people if they develop a problem.

The House, with a large Democratic majority, is expected to pass a bill with a public option in it. If the Senate version doesn’t have one, I asked, does the public option have a shot when Senate and House negotiators meet to smooth out their differences in a conference committee?

“I’m not going to — I have to get a bill off the floor,” Reid said with a low chuckle. “So I’m not going to be threatening or suggesting anything that might come in conference. Get the picture?” I did.