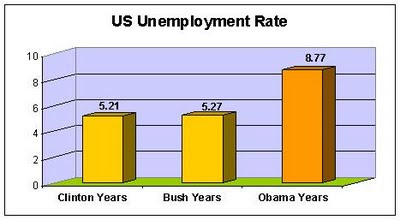 (Data collected from US Misery Index)

“We’ve begun to put the brakes on this recession and … the worst may be behind us,” Obama proclaimed in his weekly radio and Internet address, citing a new Labor Department report that shows a dip in unemployment. “But we must do more than rescue our economy from this immediate crisis; we must rebuild it stronger than before.”

It’s a pitch that comes as the Democratic-controlled Congress wrestles to write a health care plan that meets Obama’s goals of expanding coverage to millions of uninsured while reining in exploding costs.

Obama claims his plan is working.
And, now he wants to takeover the health care industry.